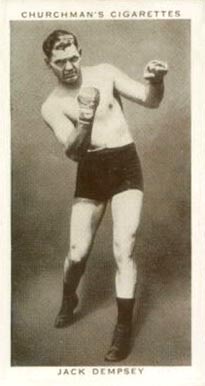 This 50 card miniature (according to today's standards) tobacco card set includes many referees, promoters, managers, and 16 Hall of Fame boxers, such as, Jack Dempsey, Joe Louis, and Jack Johnson.

Each card has a black and white photo on the front of the card and a one paragraph profile on the back of the card.