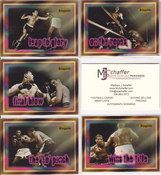 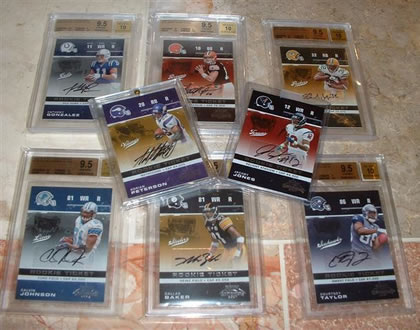 The 2007 Playoff Contenders football card set is very appealing to collectors because of its 140 autograph rookies, the many short print rookie cards, and the great design. This is a very hard set to complete because of the limited short print of some of the autograph rookie cards; such as Kenny Irons, unsigned rookie numbered to only 50 (highest price that I saw one sell for was $690.00), Joe Thomas /129, Adrian Peterson /355, Calvin Johnson /525, Sidney Rice /529, Darrelle Revis /533, and Marshawn Lynch /533.

KENNY IRONS card was a redemption that did not get signed. The player got injured in training and never returned to the Bengals. When the card did not get signed, Donruss redeemed the Kenny Irons card unsigned with a 2008 Silver Signatures Dan Marino autograph #SS-DM SP /64, a John Riggins 2008 Playoff Silver Signatures autograph SP, and a 2008 Phillip Rivers Limited Monikers aoutograph SP /17. At least that is what they sent to me.

THERE CAN ONLY BE 50 COMPLETE SETS.
The common rookies sell for an average of $7.00, so it is best to buy in bulk to get the best possible price. The short print rookies sell for much more usually the larger amount on money usually depends on the print run.

Some other helpful hints:

I hope my post has helped those collecting this set. The reason why I have so much knowledge about this product is because I have completed the set and have a second one started. So far 100 of the 140 autographs are BGS graded as 9.5 with a 10 for an autograph. I am hoping that when it's all said and done that I will have a complete graded set of 9.5 with 10's for the autograph. It will probably take me years, but its worth it to me.
- Matt Schaffer